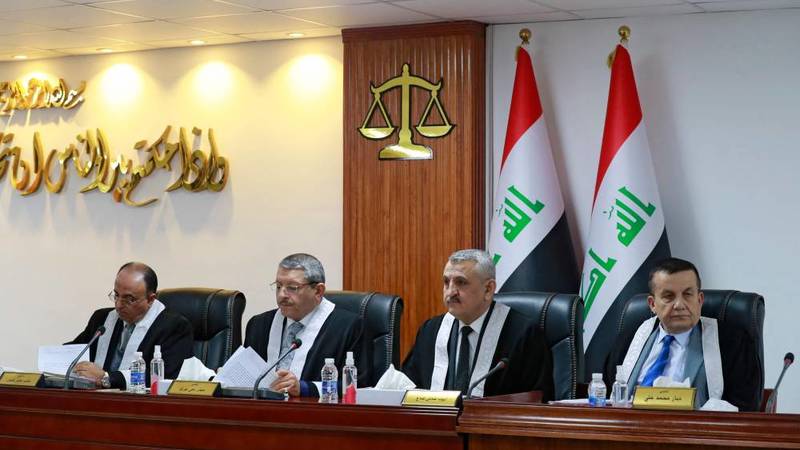 2022-02-21
In a 15 February session, dedicated to the oil exports of the Iraqi Kurdistan region without the coordination of the central government, the Iraqi Federal Court in a historic verdict ruled that the autonomous region’s oil and gas law was unconstitutional.  Under the ruling, the Iraqi Kurdistan government was required to notify the Iraqi ministry of oil and the Iraqi Inspectorate of Contracts for the sale of oil and gas.  The autonomous region is also required to provide all its oil revenue to the ministry of oil.  The ruling met various reactions. On the one hand, many of Shiite, Sunni, and Turkmen political parties welcomed the decision, calling it a step to return the power and independence of the central government. The Kurdistan Regional Government (KRG), on the other hand, called it illegal.  According to the Iraqi constitution, the Federal Court is the highest legal reference and its rulings are unarguably valid and binding for all the political parties.  Following release of the Federal Court ruling, at the first meeting of the Iraqi government cabinet chaired by Mustafa al-Kadhimi, the Iraqi oil minister was instructed to review the recent ruling on the management of the oil case in Kurdistan region. The government also instructed the oil ministry to liaise and coordinate with the KRG and related companies and countries so that the necessary measures be taken “in accordance with the constitution and the supreme interests of the country.”  The ruling is worth focusing from two aspects: First, the central government is required to apply the ruling concerning the contracts on the energy production and sales by the KRG. Second, the Kurdish region is now in the dilemma of disobedience or obedience. Reacting to the verdict, the Kurdish local parliament in a statement said that the move was contradictory to the federal system and the constitution and that such rulings deal a “fatal blow” to the federal system, governance process, and the citizen rights.” Complications of the court ruling adoption  The federal court decision comes as after 2007, the regional government in Iraqi Kurdistan has been itself managing the oil exploration, production, and sales in the areas under its control. Erbil leaders signed contracts with oil giants like ExxonMobil, British Petroleum, Total, and Rosneft and since 2009 started oil exports from Turkish Port of Ceyhan.  The unilateralism of the Kurdistan region in oil exploration, export, and revenues after 2009 led the central government, headed by Nouri al-Maliki, to criticize Erbil’s policies. For Baghdad, the problem was that the KRG’s holding of the oil revenues in addition to receiving 17 percent of the national Iraqi budget. In late 2013, al-Maliki ordered cutting off the KRG budget and delivery of the Kurdish oil sales revenues to the State Organization for Marketing of Oil (SOMO).  Since then, the delivery of oil revenues to Baghdad and Erbil contracts with oil companies became a sticking point in their relations. At present, it is not just about whether or not the KRG accepts the Federal Court ruling. Rather, a large part of Erbil contracts with foreign oil companies faces many problems. In some of the contracts, Erbil is cited as the contract party but some of the terms are definitely unacceptable to Baghdad. Whether or not the oil giants agree to review the contracts or even consider Baghdad as the main party or revoke their partnership would be a complicated matter.  Also, in a large part of the contracts, the KRG received prepayments and spent the amounts received for unknown expenses. Whether Erbil will be willing to accept responsibility for such payments is a very complex issue or Baghdad will be willing to accept control of the contracts under the current circumstances is another important issue and a source of crisis between the two sides.  No way for Erbil but acquiescing the court ruling  Despite all the complications in adopting the court decision and Erbil opposition to it, what looks certain is that the Kurdish government has no way but agreeing with it. Actually, the Kurds know it well that their illegal measures over the past years took place against the backdrop of the central government weakness. But the leading job of the future central government is to apply the Federal Court ruling. But given the recent political developments which raise possibility of an alliance of Muqtada al-Sadr, Masoud Barzani, Mohammed al-Halbousi, and Khamis Khanjar for formation of a new cabinet, the ruling of the Federal Court can disrupt a maximum-level alliance inside this quartet.