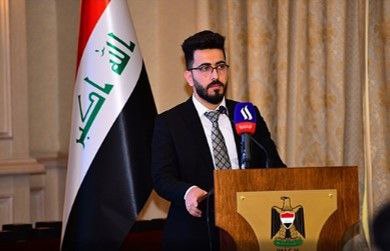 Today, Hamza Kamil is a Product Manager at the Huawei Iraq Rep Office. But his journey with Huawei started at the 4th Huawei ICT Competition — an experience that helped him grow and learn as a professional. In 2018, Hamza’s team won the first prize in the national competition in Iraq, the first prize in the Middle East Regional Competition, and finally, took home the third prize in the cloud track of the global final.
A Global Competition Opens a World of Opportunities
In 2018, the year of the 4th Huawei ICT Competition, Hamza Kamil was a student at the University of Anbar. When he saw Huawei’s roadshow on campus, he signed up for the competition out of curiosity about Huawei technologies. Hamza and his teammates worked with their instructor and used the free courses and learning materials provided by Huawei for competition participants. They also had access to a network of peers around the world, to exchange and share their learning and experience.
At the time, Iraq was in turmoil. Political instability caused heavy fighting in many regions, including Hamza’s city. Hamza, like many of his peers though, refused to let this interfere with their studies. “We spent a lot of time learning theories, studying cases, doing experiments. My city was often bombed. But we kept going with our studies,” he remembers.
The team started off by winning the national competition, moving onto regionals, which they also won. They then traveled to China for the global final. Hamza Kamil still recalls the experience — visiting a new country, meeting international peers, and of course, the feeling of being called on stage when his team’s award was announced. “When our national flag appeared on the stage, I was too thrilled to say a word,” adds Hamza.
Embracing a Career in Technology
The team came away with much learnt. “It was fascinating to visit the Huawei headquarter and learn about the company’s latest technologies,” says Hamza. After the competition, he continued to study datacom and cloud computing technologies. He also prepared for and obtained three Huawei career certifications.
Hamza’s efforts did not go unnoticed. The local recruitment team in Iraq invited Hamza to apply for a position as an engineer at the Huawei Iraq Rep Office. “I didn’t realize that participating in the competition would make me stand out as a job candidate, but it definitely did. It helped me improve my practical, innovation, and communication skills. Plus, it certified my skills to my interviewers,” notes Hamza.

In fact, the top six candidates of the Middle East Regional Competition were all invited to Huawei’s interview, and the top 50 candidates were given the opportunity to intern at Huawei.
Since joining Huawei, Hamza has won the Excellent New Employee Award in the first six months on the job. In 2019, he also won the Huawei Gold Medal Award.
Sharing His Experience with Other Students
Hamza is happy to share his experience with local students who are thinking of participating in the Huawei ICT Competition. “I met many like-minded friends. By competing with ICT talent worldwide, I learned the latest technologies and also got to know various cultures of different countries, broadening my horizons. The Huawei ICT Competition changed my life and offered a good starting point for my career. I am more confident about my future,” says Hamza.
Today, Hamza helps students succeed in the competition by serving as an instructor. In the 6th Huawei ICT Competition, two teams under his guidance won the first and second prizes in the network track of the global final. Hamza is very proud of his mentees. He hopes that more local students choose to participate in the competition, accessing better job prospects and cultivating talent for Iraq’s technology industry.

Huawei ICT Competition in the Middle East
The 6th Huawei ICT Competition saw strong support from 10 countries in the Middle East and surrounding regions, including Saudi Arabia, United Arab Emirates, and Pakistan. Over 15,000 students from 453 universities took part.
Huawei has also established 167 Huawei ICT Academies in the Middle East, supporting the growth of over 120,000 local ICT professionals. More than 40,000 people have obtained Huawei certifications.
Hamza Kamil believes that ICTs play an important role in promoting economic development, enhancing global competitiveness, and facilitating digital transformation in the Middle East. Talking about the future, Hamza Kamil says, “In the past, Huawei have helped me grow. In the future, I will in turn contribute to Huawei’s growth. This is a virtuous cycle, just like Huawei’s robust ICT talent ecosystem.”