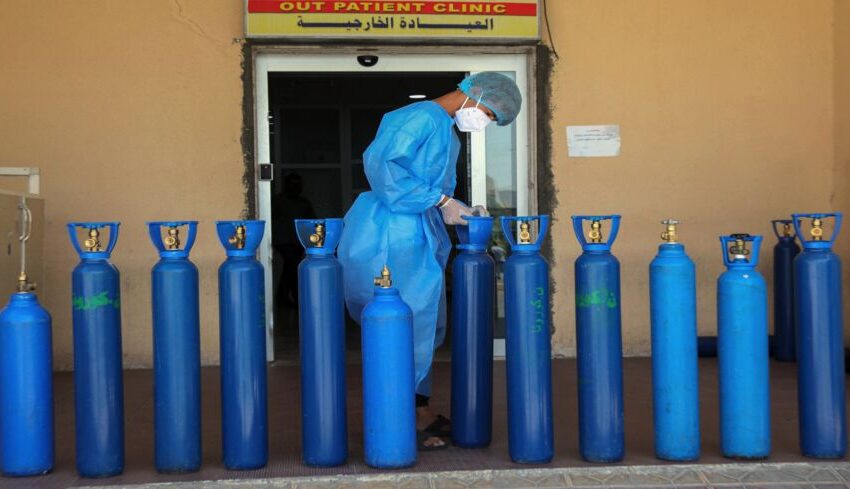 The Iraqi Ministry of Health worries that too many Iraqis are disregarding public health guidance and refusing to get vaccinated.

Iraq’s alarming rise in the number of coronavirus cases and deaths pushed the parliament’s Crisis Committee to meet on July 26 to study the situation. Technical Undersecretary of the Ministry of Health Dr. Hani Al-Aqabi warned Iraqis on July 23 about the seriousness of the pandemic in the country, as hospitals have become overcrowded with infected patients.

On July 23, Dhi Qar Gov. Ahmed al-Khafaji announced that those who are unvaccinated would not be allowed to enter the province. Karbala province is relying on security forces to force citizens to comply with preventive measures.

Officials in the provinces of Ninevah and Kirkuk sounded the alarm on July 23 after hospitals in the two northern cities were overwhelmed with coronavirus patients.

The aggravation of the health crisis prompted the Iraqi Fiqh Council to issue a fatwa on July 23 allowing people to receive the coronavirus vaccine and prohibiting the circulation of false news.

The total number of coronavirus cases in Iraq exceeded 1 million cases on April 24. Social media sites shared on July 22 a picture showing people with COVID-19 quarantining in special centers and eating food laid out on the floor.

Dr. Ruba Falah Hassan, a member of the medical team speaking to the media on behalf of the Ministry of Health, told Al-Monitor, “The health situation is dangerous in Iraq due to the increase in the number of deaths, while the number of infections has reached record highs.”

Hassan believes “the third wave of the COVID-19 pandemic is the most dangerous for Iraqis, as infections have reached young age groups.”

“The Ministry of Health has good capacity, and the situation is under control so far. Yet just like it is in all countries, the capacity of the health sector in Iraq is limited. The increase in cases could lead to loss of control over the situation in the future,” she said.

Hassan added, “The ministry has enough vaccines; they are safely stored. And the ministry has also succeeded in expanding the centers available for vaccine rollout in all provinces and in delivering it to more than 1 million citizens.” She stressed that “no side effects were recorded thanks to the ministry’s performance providing safe vaccination in line with the guidelines of the World Health Organization.”

Parliament and Health Committee member Rashid Al-Azzawi told Al-Monitor, “Most of those infected with coronavirus do not go to hospitals and prefer treatment at home.”

Azzawi criticized Iraqis because “they do not follow the recommendations issued by government agencies. The gatherings, electoral campaigns, religious ceremonies and wedding parties continue despite the warnings.”

He pointed out that “although some people are reluctant to take the vaccine, the situation is improving. It is expected that in the next month, the majority of Iraqis will be vaccinated.”

Azzawi believes the government “cannot impose a comprehensive ban because people do not respect it. Also, the hospital fires reduced trust in the public health sector.” It is nonetheless expected that “Iraqi society will be immune.”

Member of the Iraqi Association for Medical Research and Studies Dr. Wael Al-Shihabi told Al-Monitor, “The vaccine is naturally a new product, which allows misunderstandings about viruses and vaccines as well. The misconceptions even affected people’s view of drugs used to combat it like steroids and malaria drugs. All these factors contributed to people’s lack of compliance with preventive measures.”

Shihabi believes “government measures at the technical level are consistent with international recommendations on the pandemic. There are scientific committees working on updating treatment protocols.”

He added, “The distribution of vaccines and the management of their distribution went smoothly, but it was not accompanied by a solid awareness campaign to educate everyone. Voices appeared even from within the health institution questioning the usefulness of the vaccine.”

Professor and associate dean of scientific affairs in the college of science at Al-Mustansiriya University Ilham Khudair Shubar told Al-Monitor, “One of the upsides for Iraq, despite all the economic and political crises, is that it has provided all kinds of vaccines.”

He added, “The rampant corruption in state institutions makes citizens fearful and skeptical about the validity of the vaccine and its effectiveness.”

A report by Agence France-Presse on July 1 stated that COVID-19 provided a new door to bribery and corruption in Iraq. Saif, owner of a restaurant in Baghdad, found himself forced to pay bribes to keep his restaurant open during curfew.

Dr. Ahmed Al-Rudaini, a specialist in the Iraqi Ministry of Health, explained to Al-Monitor, “Society’s view on the importance of the vaccine changed when people realized how high the number of cases was.”

“The health system in Iraq is struggling to control the large number of cases of infection, and medical and health staff are under great stress due to the great pressure on institutions,” Rudaini added.

Hazem added, “The problem is exacerbating. The situation is very critical despite the health authorities’ recommendations. They have not been able to fully implement the recommendations in practice or to impose a proper curfew.”

Professor of psychology at the University of Baghdad Ahmed Abbas al-Dhahabi told Al-Monitor, “People are reluctant to get the vaccine because of anxiety and fear triggered by the bad living conditions and the collapse of the infrastructure. Moreover, the health system in the country is weak. Fighting a pandemic is not just about providing vaccines — it is also about running proper awareness campaigns and controlling rumors.”