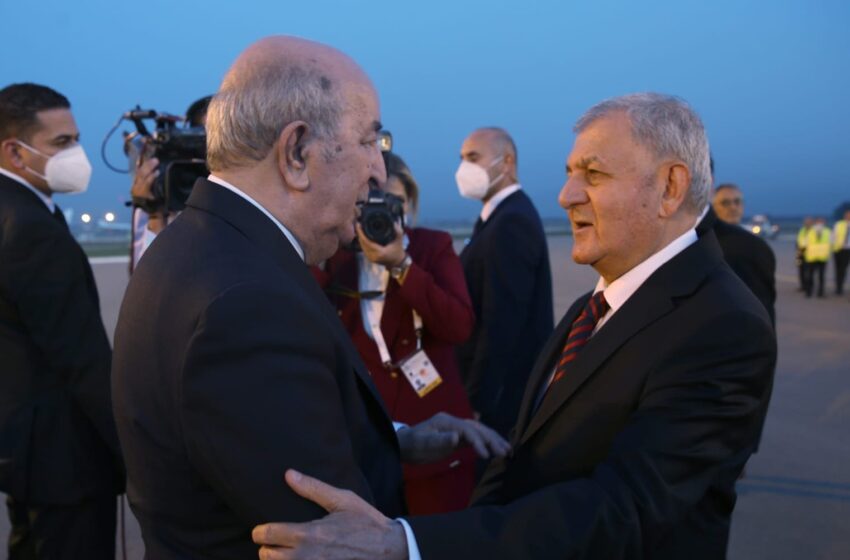 Iraqi President arrives in Algeria for the Arab League summit

The Iraqi President, Abdul Latif Rashid, arrived in the Algerian capital, Algeria, on Monday, to participate in the meetings of the 31st Arab League summit, according to a press statement issued by the Iraqi Presidency.

The statement elaborated that Rashid was received by the Algerian President, Abdelmadjid Tebboune, and the Secretary-General of the Arab League, Ahmed Aboul Gheit, upon his arrival in Houari-Boumediene International Airport (Algiers International Airport) where the national anthems of Iraq and Algeria were played.

Rashid, Tebboune and Aboul Gheit held a meeting in the Hall of Honor at the airport where Tebboune welcomed Rashid and expressed his happiness about Iraq’s participation in the summit, according to the statement.

Rashid wished Algeria success in organizing the summit and expressed his hope that the summit would achieve the aspirations of the Arab people towards stability, progress and prosperity, the statement mentioned.

The Iraqi Presidency mentioned that Rashid is accompanied by a high-level delegation to participate in the summit that will take place on 1 -2 November, where the Iraqi President will deliver a speech on Iraq’s regional and international relations and the future plans of the new Iraqi government, the statement added.

The summit was postponed several times before its date was confirmed on November 1, 2022. It was initially to be held in 2020, 2021 and finally March 2022, but due to the COVID-19 pandemic, it was postponed to November to coincide with the anniversary of the outbreak of the Algerian Revolution.

Representatives of 21 countries will participate in the summit which is the first since a number of countries normalized relations with Israel.

The King of Saudi Arabia, the Crown Prince, the King of Bahrain, the Lebanese President and the Sultan of Oman will not attend the summit.