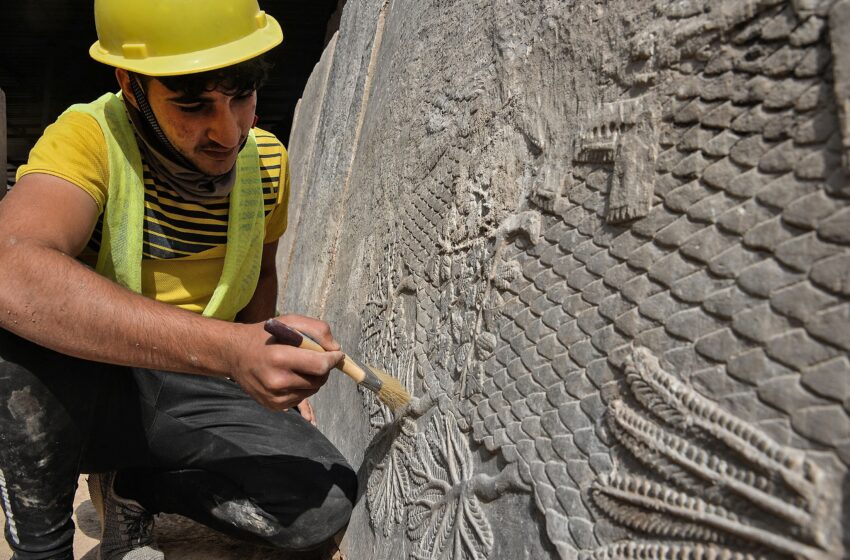 A remarkable find by archaeologists in northern Iraq was the discovery of stunning rock engravings that date back roughly 2,700 years.

They were found in Mosul, Iraq by a US-Iraqi excavation team working to reconstruct the ancient Mashki Gate, which Islamic State (IS) militants destroyed in 2016.

Iraq is home to some of the world’s most ancient cities, including Babylon.

But years of turmoil have seen many archaeological sites looted and damaged by militants and military action.

They date back to the Assyrian King Sennacherib, who ruled the ancient city of Nineveh from 705 to 681 BC, the Iraqi State Board of Antiquities and Heritage said, in a statement seen by AFP.

The powerful king was known for his military campaigns, including against Babylon, and his vast expansion of Nineveh.

It is believed the relics once adorned his palace, and were then moved to the Mashki Gate, Fadel Mohammed Khodr, head of the Iraqi archaeological team, told AFP.

The Mashki Gate was one of the largest in Nineveh, and was an icon of the city’s size and power. The gate was reconstructed in the 1970s, but was destroyed with a bulldozer by IS militants in 2016.

The militant group ransacked and demolished several ancient sites that pre-date Islam in Iraq, denouncing them as symbols of “idolatry”.

Mr Khodr said that when the marble slabs were positioned at the gate, they were partly buried. The sections underground were preserved and bear the carvings seen today; whatever was above-ground was wiped smooth over the centuries.

The excavation team, which comprises experts from Iraq’s Mosul University and the United States’ University of Pennsylvania, is working to restore the Mashki Gate site to how it was before IS bulldozed it.