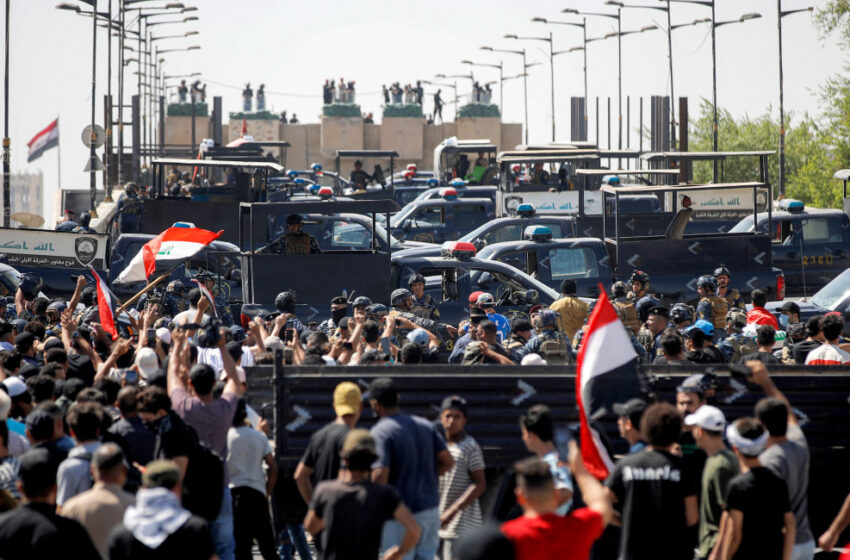 The Iraqi parliament will reconvene for the first time in two months to vote on the resignation of the parliament speaker today afternoon, amid tight security measures and renewed demonstrations.

Late on Tuesday, the Iraqi security forces sealed off the main bridges and roads leading to Baghdad’s Green Zone, home to many state and foreign diplomatic institutions.

Locals in Baghdad early this week told  correspondent that the situation is expected to deteriorate by Saturday as there are calls for large demonstrations to commemorate the third anniversary of the 2019 October protests. Iraqi civilians also warned that Sadr’s supporters in the meantime will hold demonstrations from the city’s Nusur Square amid concerns that the demonstrations will descend into violence.

According to the parliament’s agenda, today’s session includes voting on the resignation letter of al-Halbousi and electing the first deputy speaker.

Before the parliament’s session, loyalists of Sadr took the streets to pass into Baghdad’s Green Zone, yet Iraqi security forces prevented them from going any further by erecting high new blast walls on all the main bridges and roads leading to the fortified area.

Halbousi, a former Sadr ally, on Monday, clarified that he does not want to “impose” himself by sticking to his post.

Addressing a panel at Rafidain Center for Dialogue in Baghdad, Halbousi also said that it is up to Iraqi MPs to decide on whether to trust him again, hinting that remaining in such a senior post needs “normal” conditions and cooperation by all the political parties.

The new alliance aims at electing a president for Iraq and forming an interim government with full powers for at least one year and a half, paving the way for fresh general elections following amending the country’s election law.

Thus, many Iraqi political observers expect the resignation in fact may serve as a vote of confidence for him.